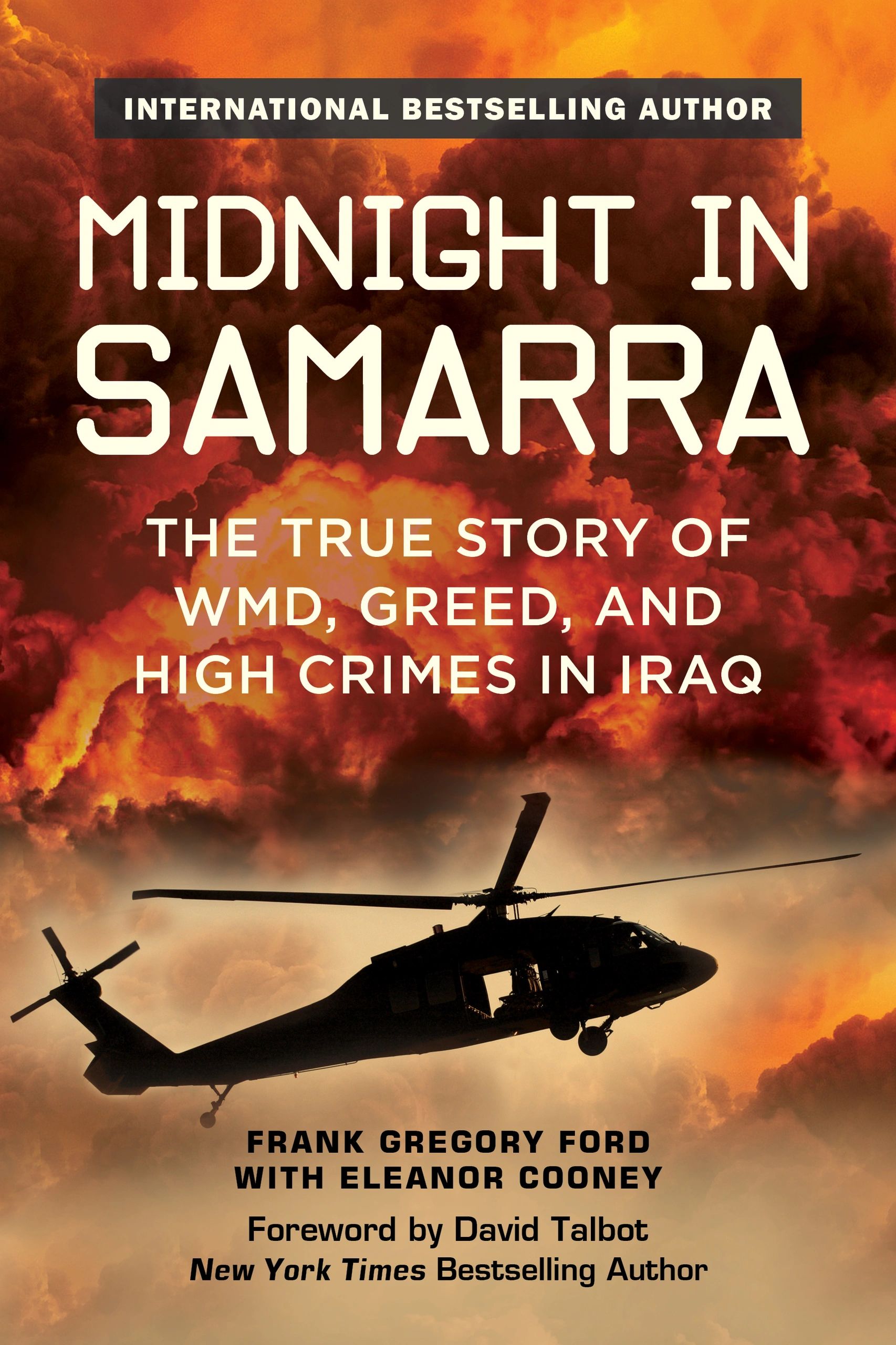 "Riveting! Reads like a cross between Carlos Castaneda and The Guns of August!"--Barbara Honegger, author of The October Surprise

Get MIDNIGHT IN SAMARRA

“I know where Saddam Hussein is hiding,” said the Sheik, so calmly and casually as he made himself comfortable on my camel-hide sofa that it could only have been the truth. “I can tell you where he is and how to capture him.”

He’d appeared unannounced, as usual. I’d known by the studied, deliberate way he extracted a Gauloises from its gold case, examined it, tapped it, lit it, inhaled and exhaled while he chose his words that whatever he was going to tell me was big.

And indeed, this was a bit of information I didn’t think even the Balad bureaucrats would be able to slough off.

Trying to stay casual myself, I came to hyper-alert attention. Not only was this distinguished man the titular Sheik of the Saladin Province, which included the territory from Samarra to Tikrit and all the surrounding Tigris River area, he had known Saddam since they were children. Everything he’d told me so far had proven to be true and of incalculable value. I’d heard rumors that the CIA wanted to get their hands on the Sheik. If that were to happen, I knew all too bitterly well what his fate might be.

“Why would you reveal Saddam’s whereabouts?” I asked, because I was genuinely curious. “Doing so puts your life in grave danger.”

“My life and the lives of my people are in danger anyway,” he answered. “The trouble and complication caused by Saddam’s presence in our midst adds exponentially to that danger. I want him out of there.” He paused, then added: “Besides, his day is done.”

--From MIDNIGHT IN SAMARRA

The only photo Greg Ford has of his great friend and "asset" (intel term for supplier of information), the titular Sheik of Iraq's Saladin Province, of which the ancient gold-trading city, Samarra, is the capital, where Ford was stationed as an intelligence agent.  This man, who had known Saddam Hussein from childhood, and who knew everything that went on in the province--from planned attacks on the Americans to where hundreds of millions of looted dollars were hidden to where the dictator himself was holed up, and who astonished Ford with hitherto unknown information about the identities of the 9/11 hijackers--risked his life over and over in order to bring invaluable information to the Americans, who, the Sheik believed, were there to "liberate" Iraq. He, like Ford himself, learned the hard truth in the hardest way possible. But the two were fast friends to the end. After Ford left Iraq, he heard a sad rumor, probably true, that the Sheik was executed in his own home...

The invasion had barely begun:

Frank Gregory Ford, an intelligence agent, medic and combat engineer, was in Iraq for only a  short time—from the invasion in March 2003 until mid-June of the same  year, when he was strapped to a stretcher, drugged, and “renditioned”  out of Iraq in a clandestine and criminal  operation, at the behest of his command, who were frantically trying to  silence him. But why?

Midnight in Samarra is the shocking true story of one soldier’s  attempt to speak up and report the abuse and torture he saw being  inflicted on the local population, as well as secret, incriminating, enormous Iraqi arms stores of American-made Weapons of Mass Destruction with bills of lading implicating, among others, famous political  families. His warnings about simmering anti-American fury of the local  populace were ignored and suppressed by his command; hundreds of  millions of dollars in cash seized in the home of Saddam  Hussein’s main banker as a result of Ford's intelligence work vanished  without a trace. Ford’s information about Hussein’s location, which  could have led to the dictator's apprehension six months before his actual capture,  was  also ignored and suppressed. As Ford was filing charges against his  superior officers, they seized his weapons (illegal in a war zone),  tried to declare him insane, abducted  him by force, restrained him, administered a dangerous mind-altering  drug during a Medevac flight, and tried to interrogate him while he was  under.

Years later, Gregory Ford is still trying to get justice. His  command—and high-ups in both the military and the government—lied,  dissembled, obfuscated, danced, and dodged while Ford endured libel,  slander, and innuendo, feared for his life, and, nearly a decade  after the drugging on the plane, learned that the chemical injected  into him had done permanent damage to his heart and nervous system. Midnight in Samarra is the story of one man’s courage and conviction, and the horrifying truths of one of our most trusted and honored institutions.

“Greg Ford has some amazing and disheartening stories to tell from his brief deployment to Iraq during the opening invasion in 2003. His memoir cracks open secrets about incompetence, brazen self-interested careerism, and cruelty among U.S. Army officers, presenting a veritable litany of what not to do when invading a country under false pretenses. Refusing to compromise his integrity and moral principles, Ford has paid a heavy price for objecting to the crimes he witnessed.”

On September 11, 2001, Greg Ford was in the California National Guard reserves. He was in his 40s, a highly trained intelligence agent and was halfway through medical school, had been in the military since he was 18, and planned to retire in late 2003.

Like everyone else who watched the towers come down that day, he knew things would never be quite the same. He could not have dreamt how his own life would be affected. By 2003, despite massive world-wide protest, the Bush Administration's war machine had engaged its gears and was poised to invade Iraq. Greg Ford, who did not subscribe to the "official" story justifying the invasion--that there was a link between the 9/11 attack and Saddam Hussein--found himself effectively "conscripted." They were getting a three-for-the-price-of-one bargain with Ford--an expert in intelligence, a highly trained medical man and also a combat engineer. He went, telling himself that with his special skills he could save lives, both American and Iraqi. Within days of rolling across the border he was befriended by an Iraqi colonel, once a pilot in Saddam's air force. The man said there was something Ford needed to see, and escorted him to a bunker hidden below an air base in Balad. Soon Ford found himself deep underground in  eerie reddish  light, sweat dripping into his eyes, trying to make sense of the sheer enormity, in every sense of the word, of what he was seeing. When I report this mind-boggling find, he thought, this war will be instantly over.  We will pack up and go home.

He was wrong. This is his story.

What some savvy readers had to say about MIDNIGHT IN SAMARRA:

"It must have been painful for Greg Ford to tell his story. It is painful to read it. There are forces in place determined to silence all soldiers with a conscience, using false accusations and severe discipline to shut them down. Few stand up and give voice to truth. It's a long process, painfully littered with dead ends and threats by people who want the truth to go away. Greg Ford is a determined man and committed to telling his story. Read and read again what commanders and senior officers are capable of doing to "one of their own" in order to cover up intentional crimes and personal failures. They picked the wrong man when they tried to silence Ford. They obviously never looked at his personal history; whoever thought he would just roll over did not know him at all. His story is a powerful testament to how far corrupt leaders will go to get whatever they are after, even if it means committing felonies of unimaginable proportions."

—Janis Karpinski, former Brigadier General and Commander of the 800th Military Police Brigade and author of One Woman's Army: The Commanding General of Abu Ghraib Tells Her Story


“Midnight in Samarra is a uniquely mind-blowing and brilliant contribution to our understanding of the various evil forces that have mired America in the never-ending Iraq war. Authors Greg Ford and Eleanor Cooney combine their unique talents to give us the backstory of criminal intrigue in Washington DC and Baghdad, the lies about WMD and Saddam Hussein, hundreds of millions of dollars looted by senior officers, and much more. Greg Ford's first-hand account of the minute details of his harrowing experience is astounding in its recall, as is his courage and determination to survive and tell the world what happened when he tried to "blow the whistle." Cooney, a first-rate writer, has lassoed Ford's complex and far-flung story and shaped it into a taut, suspenseful narrative that reads like fiction, but, alas, is not.”

—Dr. Philip Zimbardo, professor emeritus of Psychology, Stanford University and author of The Lucifer Effect and The Time Paradox

“This first-hand account of the 2003 U.S. war in Iraq by a military intelligence whistleblower sets the record straight regarding the allegedly elusive weapons of mass destruction. The discovery in Samarra by Ford of VX gas canisters of American origin, and the lengths to which Washington went to cover up their existence, should be included in every account of the war following the publication of this book.”